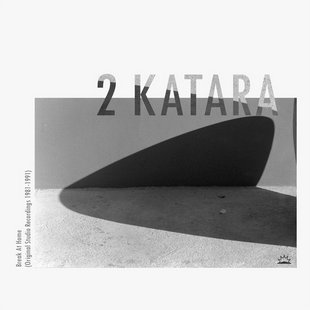 ‘Break at Home’ is the collected recordings of the mysterious group ‘2 Katara’ which was formed in Athens, Greece in 1978 by George Theodorakis (keyboards, percussion, vocals) with his close friend Dimitris Papangelidis (bass, guitars, percussion, vocals), this musical-duo recorded quietly over a decade between Theodorakis’ family idyllic home studio in the Philopappou hill of Athens and the nearby studios Theta and SR. For some part, the tracks seem like adventurous experiments or even unfinished samplers or riffs the band starts to develop, but at the same time there are productions that clearly meant to be the backbone of an album that never came out, 14 sun-soaked productions from the above-mentioned sterling material from 1981 until 1991 where the band split. This sixth installment is meant to be enjoyed as a journey from proggy pop to TR-909 drum driving compositions to Mediterranean disco-not-disco and further futuristic synth-scapes, the many elements from the Greek traditional folk music – especially in ‘I Can Not’ which is an ambient take on a folk lament song from Epirus area and the reverse play recording of a Greek orthodox priest chant on their last ever recorded epic 17min track ‘Greek lady’ -, the unusual but clever combinations of colorful styles and the intense improvisation put the group in the first line of Athens’ best kept secrets!